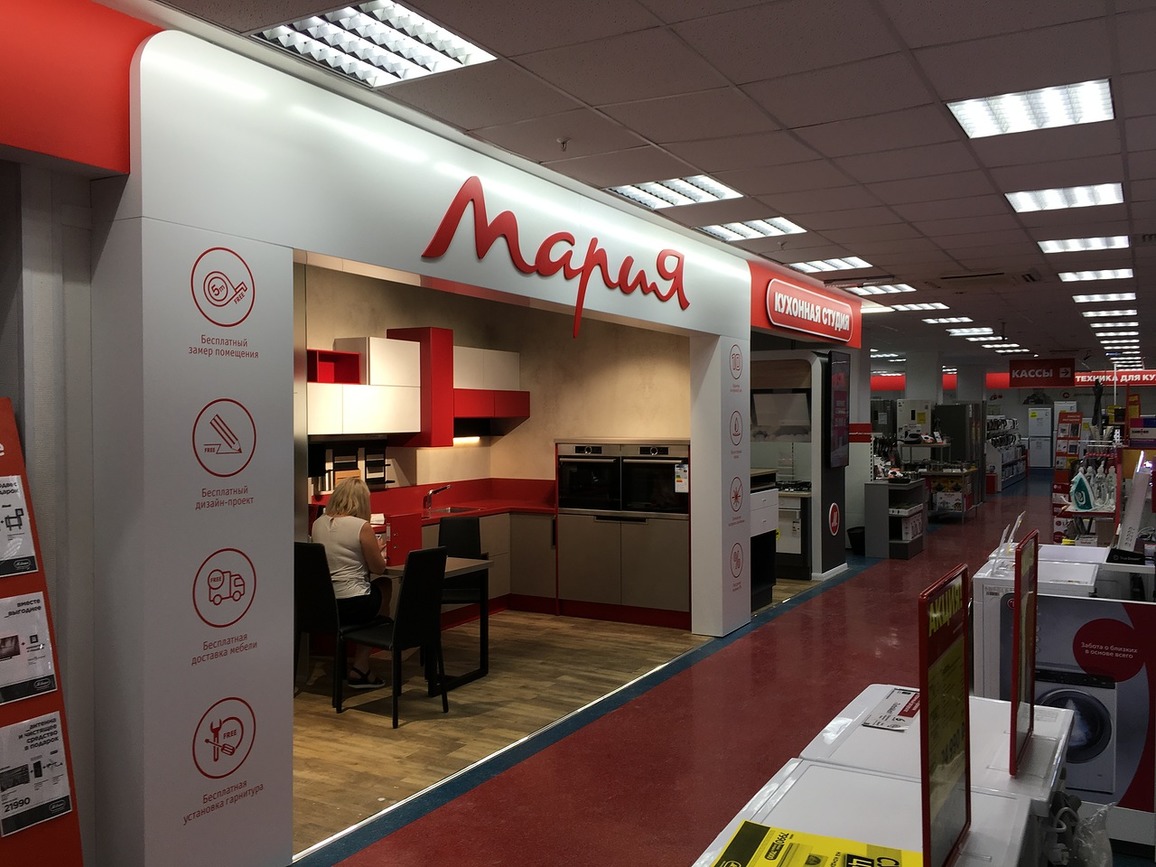 The leading Russian manufacturer of kitchen furniture and the largest retailer of electronics and home appliances are launching a large joint project. The pilot points of sale are already working in Rostov-on-Don, Ekaterinburg, Samara Chelyabinsk, and Tyumen.

The whole range of “Maria” models is available for customers in the kitchen studios. Four to Six of the most popular models, equipped with appliances are exhibited in the shop. You can now do everything in one place: choose a design for your kitchen, order a free design-project of the future kitchen, choose all of the necessary appliances – a stove, a refrigerator, a dishwasher and a microwave, considering the space of your kitchen and your budget.

Furniture factory “Maria” became the first one in Russia to work with a new sales format, opening kitchen studios in large electronics and appliances retailers.

“It is a perfect solution for modern people that live in a fast pace. We understand that time has become extremely valuable. That is why we open studios in the places that are really convenient for our customers.” – says Efim Katz, the CEO of the factory “Maria”. – the cooperation with retailers was started back in 2015, when we signed a deal with a network of the “Eldorado” hypermarkets. Our joint project is actively developing. In terms of the project we sell furniture of the middle price segment under the brand MIA. We have already reached a point of 1000 sales per month and the network consists of 71 studios in 40 cities of Russia. We plan to get the number of studios to 150 in the nearest years.

“M.Video” became the first retailer of electronics and home appliances, where the main brand of the factory is represented – “Maria” kitchens. The total amount of investments of both companies will be around one billion rubles. The project is planned for four years. By 2020 “Maria” is planning to sell about 20 000 kitchens a year in this network of hypermarkets.

- More often Russian people prefer to purchase built-in appliances – says the director of retail sales of “M.Video”, Steve Lewis. –The sales of this segment in pieces grew by 12% in the last year. At the same time, the whole segment of large home appliances grew by only 9%. The project of “M.Video” and the factory “Maria” radically solves the construction problem – you can get all of the information, view several options and choose the best one for you in one place now. At the same time it is actually cheaper now to buy the kitchen furniture and appliances together – your discount can get up to 30%”.

The first studios opened in Rostov-on-Don, Ekaterinburg, Samara Chelyabinsk, and Tyumen and are already popular among the customers. Until the end of 2017 the furniture zones will open in Moscow, Odintsovo, Saint-Petersburg. We plan to open 150 shops in the next 4 years.